To sail is to live 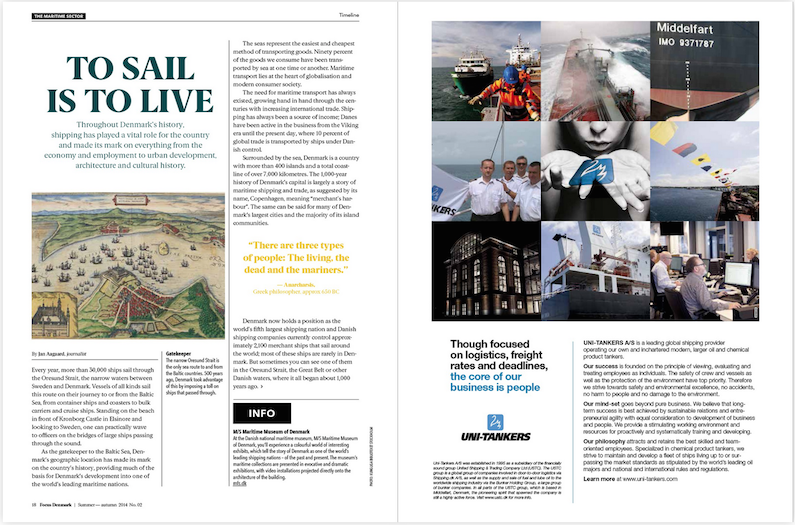 Throughout Denmark’s history, shipping has played a vital role for the country and made its mark on everything from the economy and employment to urban development, architecture and cultural history.

Every year, more than 30,000 ships sail through the Oresund Strait, the narrow waters between Sweden and Denmark. Vessels of all kinds sail this route on their journey to or from the Baltic Sea, from container ships and coasters to bulk carriers and cruise ships. Standing on the beach in front of Kronborg Castle in Elsinore and looking to Sweden, one can practically wave to officers on the bridges of large ships passing through the sound.

As the gatekeeper to the Baltic Sea, Denmark’s geographic location has made its mark on the country’s history, providing much of the basis for Denmark’s development into one of the world’s leading maritime nations.

The seas represent the easiest and cheapest method of transporting goods. Ninety percent of the goods we consume have been transported by sea at one time or another. Maritime transport lies at the heart of globalisation and modern consumer society.

The need for maritime transport has always existed, growing hand in hand through the centuries with increasing international trade. Shipping has always been a source of income; Danes have been active in the business from the Viking era until the present day, where 10 percent of global trade is transported by ships under Danish control.

Surrounded by the sea, Denmark is a country with more than 400 islands and a total coastline of over 7,000 kilometres. The 1,000-year history of Denmark’s capital is largely a story of maritime shipping and trade, as suggested by its name, Copenhagen, meaning “merchant’s harbour”. The same can be said for many of Denmark’s largest cities and the majority of its island communities.

Denmark now holds a position as the world’s fifth largest shipping nation and Danish shipping companies currently control approximately 2,100 merchant ships that sail around the world; most of these ships are rarely in Denmark. But sometimes you can see one of them in the Oresund Strait, the Great Belt or other Danish waters, where it all began about 1,000 years ago.

From viking ships to super tankers

The sea has always been an important means of transport for the Danes; waters did not separate, but rather connected the nation. To trade with other Danes and the rest of the world, you had to sail.

The Vikings build sturdy and seaworthy vessels – some powered by rowing, others equipped with sails. They set off on long voyages to destinations including the British Isles, Greenland and even North America. The Vikings also sail along the coast of Western Europe to the Mediterranean, reaching modern-day Istanbul, and along the Russian rivers.

From distant lands they bring jewellery, gold coins and other valuables home to Denmark. The Viking era marks the beginning of international shipping in Denmark while shaping the Danish kingdom. The Vikings meet in fjords and bays with a safe anchorage and a population to trade with, giving rise to the Danish port cities and towns in which shipping and trade have since evolved.

1400 – 1500
Denmark imposes a special toll, called Sound Dues, on foreign ships passing through the narrow strait between Helsingborg and Elsinore (photo), where Kronborg Castle – known as the home of Shakespeare’s Hamlet – was built to guard the gateway to the Baltic Sea. The toll brings the Danish state great wealth from the growing trade between Western Europe and countries along the Baltic Sea. Danish ships also partake in trade, servicing harbours in the Netherlands, England and other countries. In the late sixteenth century, 4,000 to 5,000 ships pass through the Oresund Strait each year. Denmark also assists international shipping by establishing lighthouses and markings in the waters that ships sail through on the way to and from the Baltic Sea.

1600
The Danish merchant fleet transports cargo for Dutch, German, English and Polish merchants. The Danish King Christian IV founds a number of trading companies that truly internationalise Danish shipping and trade. The companies equip large ships for multi-year trading expeditions and establish trading strongholds in India (photo), Guinea and the Caribbean. Ships can be away from Denmark for years. A journey to the Danish colonies in India typically takes 18 months, assuming the ship does not encounter any delays, which are common and often fatal. Of 76 ships sent from Denmark to India from 1616 to 1720, at least 11 sink; and many sailors typically die on voyages, mainly due to illness.

1700
Wars between the great maritime powers in Europe trigger explosive growth in the need for transport under a neutral flag. Danish ships are virtually the only ones free to sail in the colonies, shipping goods to countries such as France, England and the Netherlands. With state support, Danish ships transport sugar from the French colonies in the Caribbean to France, cotton from India and tea from China to England, and colonial goods from Indonesia home to the Netherlands. The Danish capital Copenhagen blossoms economically, transforming into a European metropolis with connections across the globe. Wealthy merchants and ship owners build large mansions in the city.

1800
At the beginning of the 1800s, the number of ships flying the Danish flag peaks at about 3,500 vessels. Danish merchants and sailors earn great wealth and the merchant fleet continues to grow; in relation to its population, Denmark becomes one of the era’s greatest seafaring nations. However, Denmark’s entry into the Napoleonic Wars on the French side ends catastrophically for Danish shipping in 1807. The nation loses hundreds of merchant ships and thousands of Danish sailors are held in British captivity. In the late 1800s, a number of steamship companies are founded, many of which play a central role in Danish shipping to this day.

1900
Danish merchant ships sail in most parts of the world and increasingly operate scheduled traffic, including to Asia and the Americas. Shipping companies such as East Asiatic Company, or simply EAC, Maersk and J. Lauritzen become major industry players. In 1912, EAC introduces Selandia, the world’s first ocean liner with a diesel motor and in 1920 EAC is Denmark’s largest company. In the 1970s, Maersk successfully transitions to container traffic, while other shipping companies pursue other specialties, including reefer ships, gas tankers and bulk carriers.

2014
Denmark is the world’s fifth largest shipping nation and around 10 percent of world trade is transported by ships under Danish control. Maersk Line is the world’s largest container shipping company, with more than 600 ships, 35,000 port calls per year and 100,000 customers around the world. Other Danish shipping companies, such as Norden, DFDS, Clipper, J. Lauritzen and Torm, are strong in other highly specialised areas such as product tankers, bulk carriers and service vessels for the offshore industry.