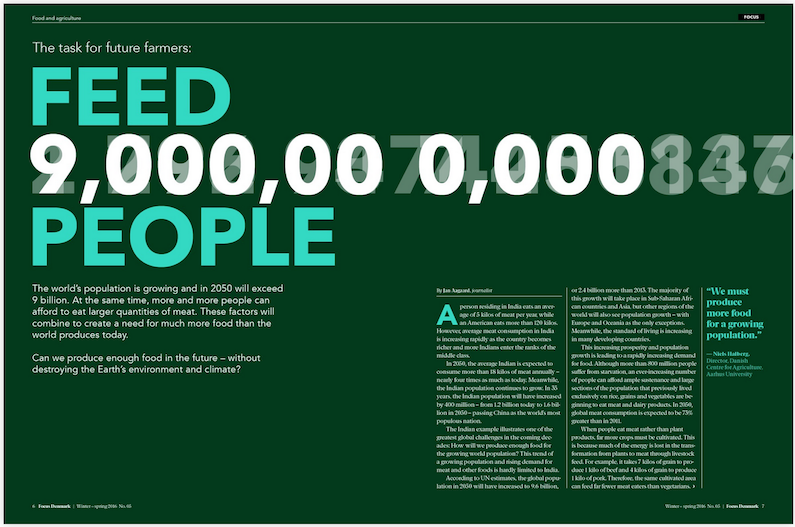 The world’s population is growing and in 2050 will exceed 9 billion. At the same time, more and more people can afford to eat larger quantities of meat. These factors will combine to create a need for much more food than the world produces today. Can we produce enough food in the future – without destroying the Earth’s environment and climate? Artikel bragt i magasinet Focus Denmark A person residing in India eats an average of 5 kilos of meat per year, while an American eats more than 120 kilos. However, average meat consumption in India is increasing rapidly as the country becomes richer and more Indians enter the ranks of the middle class. In 2050, the average Indian is expected to consume more than 18 kilos of meat annually – nearly four times as much as today. Meanwhile, the Indian population continues to grow. In 35 years, the Indian population will have increased by 400 million – from 1.2 billion today to 1.6 billion in 2050 – passing China as the world’s most populous nation. The Indian example illustrates one of the greatest global challenges in the coming decades: How will we produce enough food for the growing world population? This trend of a growing population and rising demand for meat and other foods is hardly limited to India. According to UN estimates, the global population in 2050 will have increased to 9.6 billion, or 2.4 billion more than 2013. The majority of this growth will take place in Sub-Saharan African countries and Asia, but other regions of the world will also see population growth – with Europe and Oceania as the only exceptions. Meanwhile, the standard of living is increasing in many developing countries. This increasing prosperity and population growth is leading to a rapidly increasing demand for food. Although more than 800 million people suffer from starvation, an ever-increasing number of people can afford ample sustenance and large sections of the population that previously lived exclusively on rice, grains and vegetables are beginning to eat meat and dairy products. In 2050, global meat consumption is expected to be 73% greater than in 2011. When people eat meat rather than plant products, far more crops must be cultivated. This is because much of the energy is lost in the transformation from plants to meat through livestock feed. For example, it takes 7 kilos of grain to produce 1 kilo of beef and 4 kilos of grain to produce 1 kilo of pork. Therefore, the same cultivated area can feed far fewer meat eaters than vegetarians. “We are basically facing a huge challenge, which is not only about providing enough food for three billion more people. The greatest challenge is the growing demand due to increased prosperity. We can probably feed the world in 2050, but it will be very difficult to feed the world with meat,” says Professor Kristian Thorup-Kristensen from the University of Copenhagen’s Department of Plant and Environmental Sciences.

Need for a giant leap

According to the World Resources Institute (WRI), 69% more food calories will be required in 2050 to meet the average daily calorie needs of the world’s population. The question is whether the global agriculture production can produce enough food to meet this need – and what consequences this may have for the Earth’s environment and climate. Until now, the world has largely been able to increase its agricultural production in line with global population growth. In principle, we could now produce enough food to provide sustenance to the entire world if the starving and malnourished people could afford to the buy the goods. Food production has increased throughout the previous century, particularly during “the green revolution” in the 1960s and following decades, where the breeding of maize, wheat, rice and other crops was combined with an increased use of fertilizers, pesticides, irrigation and farm machinery. These factors led to a three-fold increase in the grain production of developing countries in just four decades. Similar giant leaps may also be required in the coming years. According to WRI, meeting the need for food in 2050 without increasing the total area of cultivated land would require growth exceeding that seen from the 1960s to today by about one-third. However, there are no prospects of such major improvements in crop yields from intensive agriculture in the developed countries. Meanwhile, the potential for improving yields remains great in many developing countries – particularly in Sub-Saharan Africa, where the green revolution never materialised due to a combination of factors.

Agricultural production can also be increased by expanding farmland. Today, 37% of the world’s land area outside Antarctica is already used for agricultural production. Yet according to the UN Food and Agricultural Organisation (FAO), it is still possible to expand the world’s farmland by more than two-fold. However, the conversion of forests, savannahs and other natural areas to farmland entails the risk of major environmental consequences. The expansion of farmlands is already one of the main causes of the destruction of ecosystems and loss of biodiversity. And farming uses 70% of all fresh water drawn from rivers, lakes and groundwater, while water shortages are a significant problem in many regions. Increased agricultural production is also a threat to the climate. Agriculture accounts for nearly a quarter of the global emissions of greenhouse gases that lead to climate change; and although it is possible to increase the carbon efficiency of agriculture, an expansion of farmland will inevitably result in higher emissions. Moreover, climate change itself is a threat to agricultural production, as it will lead to less favourable growing conditions and poorer soil quality in many places – this is particularly true for large parts of Africa, Asia and South America.

“We will have to tackle three major challenges at the same time,” says Niels Halberg, Director of the Danish Centre for Agriculture at Aarhus University. “We must produce more food for a growing population. At the same time, we have to do so with reduced environmental impact to protect the aquatic environment, arable land and the biodiversity on which agriculture depends. The third challenge is climate change, which will have a negative impact on agricultural production in many parts of the world,” he explains. This means that we can no longer rely exclusively on the classic models of agriculture, which involve adding more fertilizer and expanding farmland to increase production. “We need models that are based more on knowledge and biological understanding of the natural regulation. We have to use fewer pesticides and combine farmers’ capacity for innovation with research and knowledge to develop what we call agroecological methods,” says Halberg. Halberg and other leading researchers in the field stress that many different paths of development will be needed. “There is no simple solution to the problem, as the cultivation of crops is affected by physical, biological and socio-economic factors. To increase agricultural production, you have to address a variety of things – from new technologies and development of crops, to land reform and training of farmers,” says Kristian Thorup-Kristensen. There are big differences between the approaches required in developing countries and in the more industrialised parts of the world. “For intensive agriculture, this could mean using new technology such as sensors that collect information about the condition of the soil and plants so that you can add fertiliser and other materials in the right amounts at the right time. It is also necessary to learn to use agroecological methods, for instance for controlling weeds without using chemicals,” says Halberg. “In agriculture with low productivity in Asia and Africa, the main things lacking are knowledge and resources. These regions can achieve much higher yields by training the local farmers and using agroecological methods,” says the Danish researcher.

Danish agriculture is a good example, showing that is possible to produce large amounts of food in a limited area while still taking the environment into consideration. Denmark now produces nearly three times more food than its 5.6 million inhabitants can eat, while the Danish farmers and food companies are among the world’s leaders in sustainable, intensive food production. The high efficiency is largely due to the close cooperation between farmers, consultants, researchers and industry that was founded in connection with the rise of the cooperative movement in Denmark more than 100 years ago, which included the founding of cooperative dairies, abattoirs and animal feed businesses. This created the foundation for innovation by Danish famers and food companies, which have intensified their focus in recent decades on getting “more with less”. The production of agricultural products in Denmark has grown by 18% since 1990, while simultaneously reducing the overall environmental impact. For example, nitrogen runoff from fertiliser, which affects the aquatic environment, has been reduced by 45%. This is because the agricultural sector has developed better methods for optimising the utilisation of nitrogen, e.g. by embedding manure in the soil and spreading it on fields at the optimum times. Greenhouse gas emissions have also declined by 23% since 1990. Danish farmers have optimised livestock production as well. Milk production from Danish dairy cows has increased on average by more than 50% since the 1980s, while carbon emissions from production during that time have been reduced. Danish farmers are now among the most efficient dairy and pork producers in the world in terms of greenhouse gas emissions – thanks in large part to improvements in cultivation methods and feed composition. Many of the results achieved in Denmark would also be possible in other countries; and there is now significant international interest in the Danish models for the use of manure fertiliser and the production of milk and pork. “Danish farmers are skilled at keeping nutrients inside the circuit and they have a low consumption of water, fertiliser and pesticides. I have seen great interest in the Danish know-how among colleagues and partners in regions including China and South America,” says Professor Jørgen E. Olesen from the Aarhus University Department of Agroecology. Olesen points to the close collaboration between researchers, consultants and farmers as something that would also provide good results in other countries. Læs artiklen i Focus Denmark Ipaper (åbner i nyt vindue)